Avoid getting throttled or blocked in SharePoint Online


SharePoint Online uses throttling to maintain optimal performance and reliability of the SharePoint Online service. Throttling limits the number of user actions or concurrent calls (by script or code) to prevent overuse of resources.
That said, it is extremely rare for a user to get throttled in SharePoint Online. The service is robust, and it is designed to handle very high volume. If you do get throttled, 99% of the time it is because of custom code. That doesn't mean that there aren't other ways to get throttled, just that they are less common. For example you spin up 10 machines and have a sync client going on all 10. On each sync 1TB of content. This would likely get you throttled. 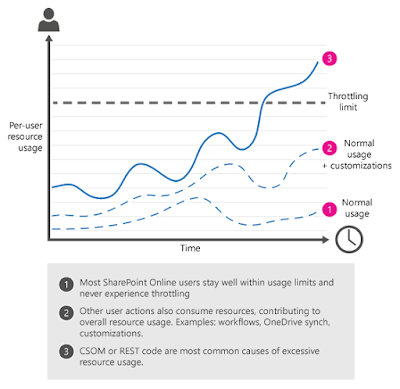 What happens when you get throttled in SharePoint Online?

When a user exceeds usage limits, SharePoint Online throttles any further requests from that user account for a short period. All user actions are throttled while the throttle is in effect.
If the offending process continues to exceed usage limits, SharePoint Online might completely block the process; in this case, you may see HTTP status code 503 ("Service unavailable"), and we'll notify you of the block in the Office 365 Message Center. The error message is shown below:


The most common causes of per-user throttling in SharePoint Online are client-side object model (CSOM) or Representational State Transfer (REST) code that performs too many actions too frequently.

Why can't you just tell me the exact throttling limits?

Setting and publishing exact throttling limits sounds very straightforward, but in fact, it's not the best way to go. We continually monitor resource usage on SharePoint Online. Depending on usage, we fine-tune thresholds so users can consume the maximum number of resources without degrading the reliability and performance of SharePoint Online. That's why it's so important for your CSOM or REST code to include incremental back off to handle throttling; this lets your code run as fast as possible on any given day, and it lets your code back off "just enough" if it hits throttling limits. The code samples later in this article show you how to use incremental back off.

Incremental back off uses progressively longer waits between retries before trying again to run the code that was throttled. You can use the GitHub code samples, later in this article, written as extension methods, to add incremental back off to your code.
Backing off is the fastest way to handle being throttled because SharePoint Online continues to log resource usage while a user is being throttled. In other words, aggressive retries work against you because even though the calls fail, they still accrue against your usage limits. The faster you back off, the faster you'll stop exceeding usage limits.

Before you run this code sample:
Core.Throttling runs as a console application using a user-only authorization policy, which means this code sample uses the permissions of the current user. In the Main method in Program.cs, a while loop repeatedly creates new folders in the test document library. A call is then made to ctx.ExecuteQueryWithExponentialRetry, which uses CSOM to perform the ExecuteQuery method. ExecuteQueryWithExponentialRetry is an extension method on the ClientContext object, and is defined in ClientContextExtension.cs.
If SharePoint Online throttles the ExecuteQuery statement, ExecuteQueryWithIncrementalRetry starts the incremental back off technique by:

CSOM Code sample: Incremental back off and retry (calls ExecuteQueryWithIncrementalRetry method, later in this article)

Posted by JoSharePoint at 5:42 AM